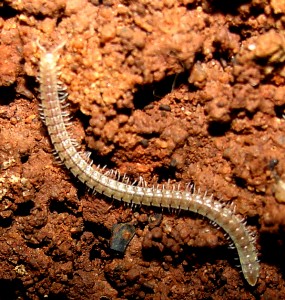 A photo of the new millipede species from Brazil

Cooperating with ecologists at the Universidad Federal de Lavras in Brazil, Dr. Shear is working on a description of a “missing link” species of millipede. We’re calling it such because it potentially combines the characters of two quite different groups of millipedes previously thought to be unrelated. The new species belongs to the Order Polydesmida, but has nearly twice as many body segments as other members of that order. Specimens of the millipede were recovered from an unusual habitat, an iron-ore cave. Most caves are found in limestone or marble, or result from “lava tubes” in volcanic areas, but these unique Brazilian caves have resulted from the erosion of iron ore deposits. The millipedes may have occupied the caves for millions of years, and are white and eyeless as a result.