Italy beckons like a beacon of wine and culture. Spain has the allure of siestas and festivals. And France spreads itself before eager travelers, a crepuscular carpet of Bordeaux and Camembert.

Students in the IAU (Institute of American Universities) program live predominantly with local French families. The arrangement is one that offers both a warm and welcoming environment to students, whether they are seasoned travelers or are in France for the first time. Indeed, for some students the prospect of living away from their families is entirely new, and the added distance of the Atlantic Ocean is certainly a cause for trepidation. But whether a student lives with a single parent or a family of five, he or she is immediately welcomed as a member of the host family and can begin focusing on enjoying his abroad experience rather than adjusting to a rather frightening situation.

But, of course, there are adjustments to be made as well. The French do things differently than people in the States, and every event, from eating dinner with one’s host family to buying bread at the local boulangerie, is an experience that leaves an indelible impression on the student.

The French eat late. For most students, nightly meals with host families rarely begin before 8:00 p.m. And the meal frequently lasts well into the night, as dinner is used as a time for communication and companionship that lingers over several courses and several glasses of wine. It is true: French cuisine is delicious in every sense of the word. Though taste-tests of various cheeses might leave your stomach thinking otherwise, consuming the best of Provençal cuisine is certainly a treat. An exhaustive list of meals would be far too lengthy to provide, and would interrupt completion of this article by intense cravings for food, but the gastronomical experience of France is one that is worth having.

The French also think, and drive, and walk, and talk, and gesture, and do pretty much everything involving interaction with people, differently than those Stateside. Smiling at passers-by is rare, and almost immediately highlights the one smiling as a tourist. Such greetings are, however, bestowed liberally on acquaintances passed in the streets, with the traditional kissing of cheeks – a custom that varies in number of kisses according to region, age, and relationship. And conversations among those accidental interlocutors in the streets are accompanied by a maximum of gesture and expression likely to make the topic of choice apparent to a number of onlookers. And passing people in the streets is an inevitability, but the starkly different concept of personal space makes dodging cyclists, dogs, and any number of motor-operated vehicles a necessity. But were it not for the masses of people, young and old, perched outside of any number of cafes chatting and observing life pass by hours at a time, surely the streets would be impassable. These details of daily life, while generalized from specific instances, can speak quite well for the culture at large and, for the purpose of revealing an underlying experience for those studying abroad, must do so.

Apart from cultural and culinary lessons there is much that Aix offers the budding artist. Once the stomping grounds of famed painter Paul Cézanne, who was born and raised just a short distance from the American Institute, Aix is filled with art. From the painters and performers who grace the crowded streets of the city center, to the more removed L’Ecole de Marchutz, an art studio in which many IAU students find themselves for more than six hours a week, the city displays an outpouring of visual art. Stepping off the streets, one might visit the Musée Granet, marveling at various works dating to the early beginnings of art in Europe, or the Musée de Vielle Aix, a historically retrospective treatment of the beginnings of this ancient city.

Even more inspiration for all things artistic might be garnered from a jaunt through the many markets that everyday fill sections of the city with flowers, fresh produce, and even wholesale, flea market goods at the marché au puces. There is certainly something spiritual in an early morning walk to class that begins with mountains of apples, veritable fields of flowers, and the shouted French colloquialisms of vendors. Even avoiding reminders of the abundance of canine companions that the French seem to love so dearly becomes something of a romantic promenade, leading one through the streets of a city whose inhabitants retain so much of their history and simple lifestyles, despite the obviously growing influx of a more modern life and younger students, French and foreign alike.

But even with lectures on Marc Chagall – given in French, of course – and visits by renowned author Toni Morrison and a panel of speakers placing an English professor at Washington and Lee next to Amy Tan, of Joy Luck Club fame, it is usually difficult to find a large number of American students walking the streets of Aix on any given weekend. Let loose in Europe, with its convenient transportation systems, most Americans, this budding journalist included, feel obligated to explore and engage with all that this part of the world has to offer. The obligation is especially reinforced by the advantages of a recently completed TGV line – train à grande vitesse, translation, a really fast train – that carries travelers from Aix to Paris in a mere three hours. 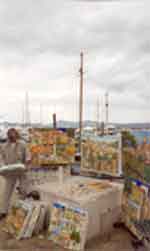 It is at such a time that one is compelled to reflect on the words of Kundera, a German philosopher, who said “life is elsewhere.” Regardless of where that elsewhere might have been found for him, the implications of his words should be obvious. There are lessons to be learned and lives to be lived, and the best way to learn and live is to go elsewhere.