A Year in Scotland
by Forrest W. Smith ’05 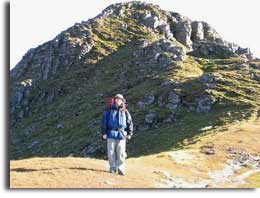 Cead Mile Failte
This is a Gaelic greeting that means one hundred thousand welcomes. That’s just what you get when you’re in Scotland. Everything about this country is beautiful, the people, culture, and landscape. When I first arrived in Edinburgh it was the last day of the Edinburgh festival. IFSA Butler had put us in the Roxburgh Hotel, which is a four star hotel. My room happened to be in the older building, and had a very mid 1900s feel to it. Suffice it to say that my first few days in Scotland were surreal. 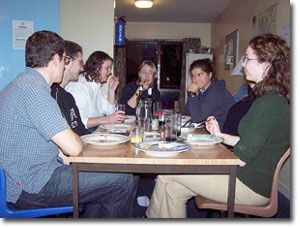 Since I have been here I have met a lot of interesting people. The flat that I stay in is part of a group of flats that are primarily international students. In my flat alone there are two Spaniards, a Frenchman, and a Welshman. In the hall that my flat is in there are, Austrian, English, Scottish, Indian, French, and American students. I have enjoyed interacting with these people from all of their respective cultures. 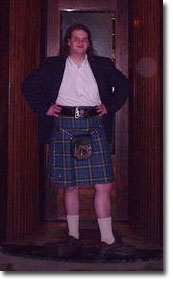 I have done a good deal of travelling. I have been to Stirling, Inverness, Loch Ness, Aberdeen, Banchory, Crathes, and to the top of Ben Lomond on the shores of Bonny Loch Lomond. I still have many more destinations to visit. Including the Isle of Skye and the Orkneys.

Glasgow University Great the main building is Gothic in style, which is my favourite architectural style, and was built in the 19th century I believe. There is plenty to do in Glasgow. With the city center just a short walk away there are numerous pubs, clubs and shops to visit. Glasgow’s UGC cinema is the tallest Cinema in the world, and the city not far from it is the famous George Square.

My favourite thing to do in Glasgow is going out to the Ben Nevis pub, every Sunday and Wednesday night. There they have live Celtic music where anyone can join in and play, which I have done. The pub is the best in the West End in my opinion.

(Forrest in the University of Glasgow Kilt on his 21st birthday at the door to Ben Nevis. )