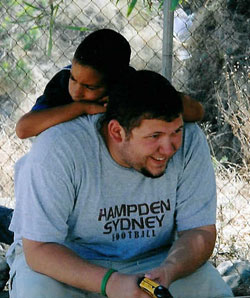 You can do anything with a degree from Hampden-Sydney College.  That is only partially true; a Hampden-Sydney Man can do anything.  Along with eleven high school students and five other adults, I spent a week in Tijuana, Mexico, at the end of last July. During this week, we built a house and a retaining wall, and we also spent two of the days working at a local orphanage.  Working in the orphanage gave us the opportunity not only to work with the kids in the orphanage but also in the surrounding community.  The orphanage system in Mexico greatly differs from that in the United States.  The Mexican system runs under the one strike policy which means that if the government takes children from unfit parents, the children stay in the orphanage until they are 18.  As a result, many parents voluntarily turn their children over to the orphanage in the hope of retrieving them when the parents’ lives become more stable.  Although these children live in less than desirable situations, they have a tremendous spirit of hope as their lives in the orphanage are better than their lives would be in the community.

My experiences on “the Hill” enriched my time in Mexico.  I took with me the Hampden-Sydney tradition of saying “Hello” to everyone you pass.  A smile and the simple word “Hola” go a long way in attempting to cross the language barrier.  The other Hampden-Sydney experience that paid off in Tijuana was the numerous hours spent in Bagby Hall learning Spanish from Professor Iglesias.

On our second night, we visited a local area church to participate in worship. On the way home, our van got separated from the rest of the group and we found ourselves lost in downtown Tijuana.  I resorted to my Mesa de Español days in trying to pick out key terms in order to understand what was being said.  Although the only directions that I could make out from the man at the gas station were, “You need to ask the taxi driver at the Chinese restaurant,” we were still able to find our way back to the church where the rest of the group was waiting.

It is the liberal arts education that I have received at the College which makes life outside of these gates so promising.  An example of this promise is my brother Justin, a 2003 graduate and the youth minister of the church whose members went to Mexico.  It is the experiences in and out of the classroom and the knowledge of broad and diverse topics that allows one to thrive in the world.  The ability to understand the struggles people are facing because of NAFTA, the ability to communicate with those of a foreign country, and the ability to be an example of a “good man and good citizen” are all things that come with studying on “the Hill.”  It is not the degree he receives that makes a Hampden-Sydney Man, it is the experiences he receives while earning that degree that prepares him for the future.