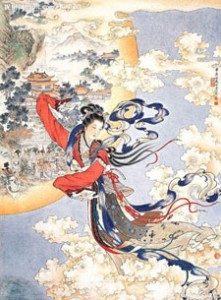 The celebration started with a video to introduce the Mid-Autumn Festival.  The Chinese have a special affection for the moon, and there are many stories about the Mid-Autumn Festival.  The most popular is the myth of Chang’e, the lady who lives on the moon with her rabbit.  On Mid-Autumn Day, millions of Chinese worship the Moon Lady.  In addition they hold family reunions.  Since a full moon represents the family, all the members will try to reach home on this day no matter how far apart they are. 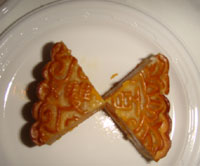 Together, the family will enjoy the moon on a cloudless night and eat moon cakes—an essential and special feature of this festival.  The tradition of moon cakes started as the sacrificial offering to the moon and later became symbolic food.  The first slice of the moon cake is always offered to the oldest one in the family to show respect to the elders.  Although the general features of the Mid-Autumn Festival are the same, different regions have their own unique traditions.  The video also showed the process of making moon cakes.

After the video, Professor Anthony Zhang, Chinese Fulbright Scholar and professor of Chinese, led nine students from his class in reciting a traditional Chinese poem, “Shui Diao Ge Tou” (Thinking of You).  After the recitation, the students sang the poem as Professor Zhang played the piano.

Next, the Tai Yin Chinese Lion Dance team from Maryland performed the famous lion dance for the audience.  This performance was made possible by the generous help of Mladen Cvijanovic, Assistant Dean of Students for Intercultural Affairs.  The lion dance team consisted of five members who were passionate about this traditional Chinese art.  They first explained the history of the lion dance.  According to the myth, thousands of years ago, the Lion from the mountain would frequently go down to the villages and harm the livestock.  However, after confrontation with the villagers, the Lion became their friend and protector.  Therefore, to honor the Lion, people developed this highly acrobatic lion dance.

The lively music of drums and gongs and the energetic performance of the lion dance pumped up the atmosphere in Crawley Forum.  The audience gave a round of applause whenever the team performed a breathtakingly difficult move.  For example, very often the young man in front would jump in the air and land on his partner’s shoulders.

After the dance, the team also demonstrated Chinese Kung Fu such as Small Five Animal Fist, Big Five Animal Fist, Chinese Broad Sword, and Big Buddha Stick.  The audience was amazed at these moves, which had been seen only in the Kung Fu movies. 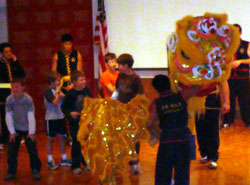 After a question-and-answer session, the performers taught the children present how to lion dance.

As the final part of the event, the organizers served moon cakes and refreshments.  All the guests left with a new understanding of another culture, the taste of delicious moon cakes in their mouths, and smiles on their faces.