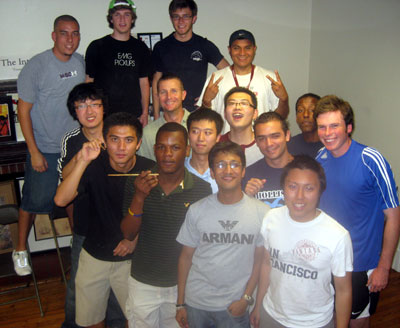 On September 16, the International House continued its annual tradition of an Open House.  The event was a huge success with a turnout of more than a hundred enthusiastic guests including faculty, students, and staff who were eager for a taste of exotic Asian food.  The foods served at the event did not disappoint the guests as each was gone shortly after it was served. The specialties were Shan rice noodle, Kung Pao chicken, Chinese meat pies, spring rolls, stir-fried bean sprouts, fried rice, and Navajo fry bread.

The celebration started at 5:30 PM, and, as the first dish, my Shan noodle was presented to the guests. It is noodle soup with pork curry.  Shan noodle is very popular in Myanmar (Burma). Since my parents run a noodle shop back home, I had no difficulty making the family food. “We are noodle folk. Broth runs through our veins,” if I may quote from the movie, Kung Fu Panda.  The guests enjoyed the Shan noodle but commented that the serving was too big as they wanted to try other food as well. Luckily for Shihao Tian ’12 from China, I had reduced the serving size, so that the guests were able to enjoy his Kung Pao chicken, the glorious outcome of his decision to learn to cook during summer. Kung Pao chicken is fried with garlic, onion, cashews, and dry chili peppers.  Tian’s authentic specialty proved to be especially popular among the guests as two large bowls of chicken were gone in a very short time. 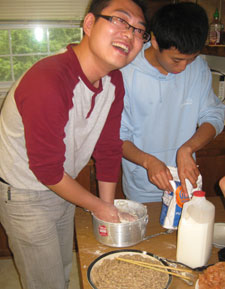 After Tian’s Kung Pao chicken, Professor Anthony Zhang (foreground), Chinese Fulbright Scholar and professor of Chinese, and Ke Shang ’13 from China served the highly-anticipated Chinese meat pies.  These meat pies were fried dumplings stuffed with a mix of grounded beef and vegetables.  The demand for the meat pies was very high among the guests.  Even after the event was over, there were still many people waiting about in the hope that there might be more these delicious pies.

Originally, we planned to serve only the above three dishes for the event as we anticipated no more than 50 people to show up.  In fact, more than a hundred guests showed up, and this unexpectedly large number pleasantly surprised the organizers.  To accommodate the greater number of the guests, we decided to cook more dishes—stir-fried bean sprouts, spring rolls, fried rice, and Navajo fry breads.  For the stir-fried bean sprouts, the duty fell into the hands of Tian, our main chef of the evening, who also impressed the people in the kitchen with his masterful pan-flipping skill.

Tan Le ’10 from Vietnam, President of International Club, cooked spring rolls and Vietnamese fried rice. Moreover, two American students, Alex Burner ’10 and Will Thomas ’11 contributed to the variety of food by making Navajo fry breads.  The Open House event finally closed at 8, an hour later than originally planned. Although the organizers, especially the chefs, were tired and hungry after the cookout, they were delighted with the success of the event.

This event showed the rising level of diversity and cultural awareness at Hampden-Sydney.  The Hampden-Sydney International House has contributed significantly to this higher level of awareness on campus. It is located in the Fraternity Circle between the Minority Student Union (MSU) and Women’s Guest House, and the house has an open door policy to everyone.