dobrý den from the city of Prague, Czech Republic!

I have been in the Czech Republic for almost a month now, and the differences between here and the U.S. are striking. Getting over wasn’t a problem, even for
a 6’4 student. I would just say that I am accustomed to never having enough leg
room. We first stopped for two days in London before taking a short flight to
the Czech Republic. The first thing that made me appreciate that I was in a very
foreign place was arriving at the airport and being unable to read anything
since it was all in Czech. 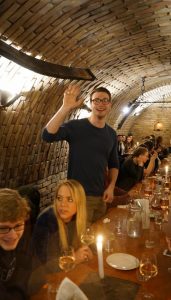 From there, it was straight to the dorms, and the
next day I started my Czech language class. I never realized how good I had it
learning Spanish until I took on the Czech language which doesn’t use vowels.
During that two-week, 5 hours a day language class, I was able to use my spare
time to travel the Czech Republic. The first week, I went to Czechy Krumlov and
visited an ancient castle. The second week, I took a two day trip to Monrovia. I
had a great time on this trip as our group was able to visit Brno, have a
private dinner in a wine cellar dating back hundreds of years, and visited The
Battle of Austerlitz Memorial. My study abroad group is comprised of about 40
kids from all over the U.S., and we are all getting along reasonably well.
Classes at Charles University just started so they are pretty uneventful so far,
but there is so much that I have already learned from living in Prague that I
will try to break it up into categories! 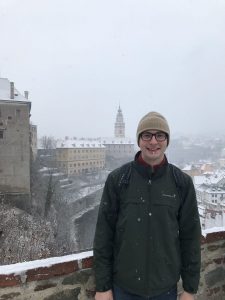 History
Being a History major, I was excited to visit a city that has been virtually
untouched for almost 600 years. In fact, my school, Charles University, was founded in the 14th century. I never realized how young America was until I learned about the statues on the Charles Bridge. I was initially disappointed to learn that they are not original since they are made out of sandstone. Therefore, they need to be replaced every 300 years, and I realized that the current
statues might be older than America itself. The fact that the bridge has
replaced its statues multiple times since the 1300s is amazing to me.

Social Interactions
It was hard to imagine how much we take for granted in America until I visited a
country that was communist until the 1980s. Communism affected, and still
effects, the lifestyle and culture of the Czech people. It seems that the Czech
people have real trust issues with one another rooted in their fear of the
communist secret police. No one talks to one another, and no smiles are
exchanged in public. Any common business transactions, such as buying food, is
done with borderline rudeness from my perspective growing up in North and South
Carolina. Same can be said for the interaction between men and women. Prague is
truly a man’s world where women need to be careful about what they say and how
they dress, especially when it is late at night. It has been difficult for many
of the girls in our group to adjust to this since America is a very
forward-thinking compared to an eastern European city when it comes to
interaction between men and women.

Living in Prague
Prague is a beautiful city, just not particularly where I live, which is in a
large dormitory. 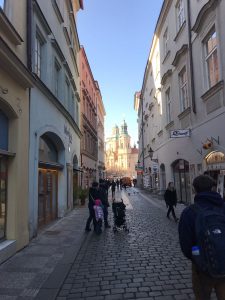 That being said, I mostly buy my food at the grocery store
except for the burrito place I frequent called Burrito Loco. I have been going
there every day since I got here since it’s close to the gym I joined. I think
that I am their only American “regular”. On Wednesday, they actually smiled at
me and gave me a free brownie, so I must be making progress! My dorm is about a
15-minute commute by metro to city center. I live in an area of the city that
was built by the communist, so it’s just what you might imagine; dark, grey, and
everything looks the same. In fact, it’s so bland that our guide told us that
after the communist left, the city had to paint each building a different color
since kids could not tell the difference between them and would get lost trying
to get home after school.

Food
A great thing about food in the Czech Republic, as compared to the U.S., is that
everything is cheap. I eat three meals a day for under $10 each. Czech
food is good, but there is little variety. It mostly consists of some stew with
meat and dumplings. It is straightforward, and I got tired of it quickly.
Thankfully Prague has excellent international food, and as long as you stay away
from the tourist areas, the food is reasonably priced.

Being in Prague has been a great experience so far, and I look forward to
sharing more in the upcoming months.