I was asked this week to write about my commute to and from my classes during the week. To be honest, I was (and still am) not entirely sure where to begin – and I think the confusion stems from the fact that my commute is never the same any given day. Now, there are a few reasons for this. The first is this: there are always at least two ways to get to any given destination (thus, an enormous variety of routes to explore). Personally, I have always preferred to avoid the more crowded stations in favor of more reliably roomy transportation, though this is not always an option. 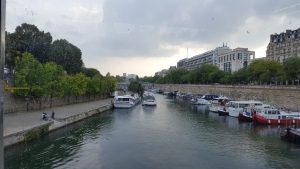 Some routes are quite scenic, including overlooks of various parts of the city, though often you are treated only to an identical sequence of grimy platforms. Beyond one’s preference of route, you also have to account for the endless variety of people one is likely to encounter in Paris’s unnaturally warm, labyrinthine tunnels. It is hard to imagine the many, many thousands of individuals that cross paths down there each and every day. One never knows if the next train will seat you next to a wealthy businessman, on his way to some important engagement, or across from a homeless musician, playing out his heart on an old, worn accordion before a captive audience. Though, in a sense, commuters are hardly captive. Easily two thirds of the occupants of any metro are thoroughly engaged with a private performance of some kind, made possible by a wide variety of earbuds, headphones, and what have you. Indeed, seeing people having a conversation on the dirty, rugged trains is rarer than seeing a 10-piece string ensemble playing jazz at an interchange (which I have seen – no picture unfortunately). And, to a degree, the companionable silence of the metro makes sense. We are all strangers on our own journeys – forced by chance and necessity to inhabit the same squeaking, soiled carriage for a few minutes before never seeing each other again. Why invest in those around you when the escape of your favorite music is literally a button press away? Why not distance yourself from the flow, observe and reflect, and go on your happy way when the train stops moving?
If you can’t tell, I’m challenging myself with these questions. Unpacking my nearly unconscious decision to shut out the real world for one of my own choosing when I can. I can’t say now whether I will follow up on the conviction that I should at least try to start up a conversation or two. I honestly can’t say at this moment if I will, or if I will retain the precious time I have to myself on my longer rides to read, to relax, to escape to someplace more familiar than the dark passages spreading like arteries beneath an ancient city above. Perhaps I am simply waiting for the right moment, the right stranger to talk to. However, if that is the case, I might be waiting indefinitely. Still, time is on my side, for the moment.