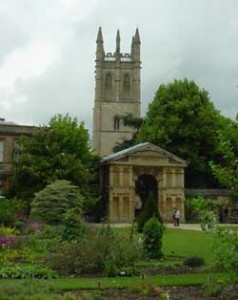 This summer, three other students from Hampden-Sydney and I participated in the Virginia Program at Oxford University in England.  Stephen English, Peter Gilman, Jonathan Miyashiro, and I traveled to England in June for the six-week study abroad program. There, we were joined by students from five other Virginia colleges: Mary Baldwin, Roanoke, Sweet Briar, Virginia Military Institute, and Washington & Lee.  The program is organized by a team of advisers (one from each of the participating colleges) and is one of the longest established American programs held at St. Anne’s College of Oxford University each year.  It was a chance to get to know students from other Virginia colleges as well as a chance to become familiar with another way of learning. 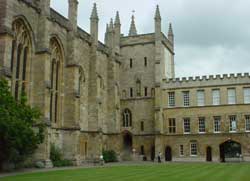 The curriculum is made up of a class on 16th and 17th Century literature and a history class which covers the Tudor and Stuart periods in Britain, both taught by Oxford University professors or professors from other institutions within the United Kingdom.  The classes are taught using the Oxford tutor system.  Four days each week students were lectured by world-renowned scholars of British history and literature.  Topics included Shakespeare, the Parliaments of the 16th and 17th Century, the Tudor and Stuart monarchs, and others.  We focused on a different work of literature and a different moment in history each week, with the lectures revolving around that 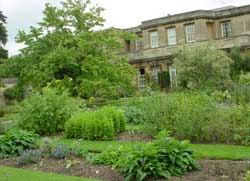 topic. At the end of each week, we wrote a short essay for our tutorial lessons.  Though the lectures provided some basis for our essays, each week we were required to read a list of books and excerpts provided to us by our two tutors.  Some weeks, the list would be as heavy as six books or more.  Through our reading and the lectures, we were expected to prepare the essay and our arguments for the tutorial session.  Each session was either two-to-one or three-to-one student to faculty ratio.  The tutorials proved to be the most intense arenas for academic conversation of which I have been a part.  All in all, the academic environment proved to be an experience to remember. 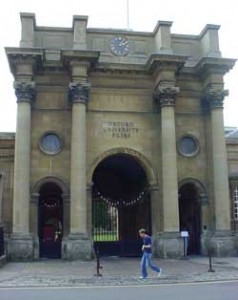 Academics aside, though, the recreational part of the trip was no bore either.  The directors of the program had set up activities that would please even the hardest to please Anglophile.  Kicking off the program in our first week was a party featuring Pimm?s, possibly the most famous Brit-beverage. Although Pimm?s quickly became several students? new best friend, I enjoyed the cricket and punting gatherings, myself.  The illustrious Dr. Ken Fincham, our British director, set up croquet parties, cricket games, and punting outings as well as private tours of the colleges of Oxford.

In the middle of the six-week program, we were granted temporary asylum from the stress of class for four days.  Most of us took the opportunity to gallivant across Europe to places like Amsterdam, Sweden, Italy, or Wales.  Some of us, however, couldn’t resist the opportunity to stay behind in Oxford and to spend the weekend buried under a stack of books at the famous Bodleian Library on campus.  At the end of the program, the directors closed the six weeks with a bang at the finest final party ever to grace the Virginia Program at Oxford.  Complete with haggis, fine wines, and ascots, the party was the last goodbye, with most of us flying out the next morning.

I, however, was fortunate enough to have almost a whole week to stay in Oxford after the end of the program. During that week, I was introduced to the world of hostels, but that’s another story.