Publications Office Note: Matthew Hubbard and Ben Shega, both Class of 2009, are teaching in Shanghai through the Marshall University (West Virginia) Teach in China Program.In the summer of 2009, Matt was one of 30 American students selected to participate in the U.S. – China 30/30 Program commemorating 30 years of student exchange between the two countries.  This was a fully funded program through the Institute for International Education Fulbright Program sponsored by the Department of State. 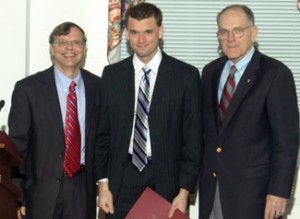 (In April 2009 Matthew Ryan Hubbard (center) received the prestigious Wilson Center Public Service Certificate from Dr. Walter M. Bortz III, Former President of Hampden-Sydney College (right), and Dr. David E. Marion, Director of the Wilson Center for Leadership in the Public Interest (left).  The Public Service Certificates are presented to seniors who have successfully completed a two-year concentration of classes, internship, and research and who are seriously considering careers in public service. )

It might be safe to say that a sizeable number of undergraduates who consider studying abroad see their experience as an opportunity for anything from achieving a higher language proficiency to self-actualization.  Programs of this nature are rarely seen through the lens of geopolitics, perhaps because some students are unwilling or unable, due to lack of awareness to view in this way the process of cultural immersion and linguistic acquisition in a foreign country.

If you are considering working in Teach for America, the Peace Corps, the military, or international business studying abroad is a means of dipping your feet in the water of a seemingly-vast pool that encompasses many careers that might appeal to your more altruistic instincts.

Studying abroad is an opportunity to make as big or as little an impact on the world around you as you wish.  If you actively seek opportunities to discuss culture, politics, and economics with the citizens of another country, it has an impact on the way they see the world.

It is probable that such interactions educate individuals and help to create the kind of understanding among the world’s citizens that is necessary if there is to be a lessening of cultural myopia and the pressure on policymakers to take actions that make cooperation in the world more difficult.  Your conversations might influence your interlocutor, who then might talk to her previously-xenophobic uncle—you know, the one who may have the ear of a national politician.

Cultural exchanges make an impact on the way peoples see each another. The professors from various foreign backgrounds who teach at Hampden-Sydney — whether temporarily or for the long term — sometimes fundamentally impact the way students at the College see themselves in the world.  Former Fulbright scholars who taught Chinese at Hampden-Sydney, Professors Guo and Li, were individuals who introduced previously unknown facets of China to H-SC students.  Those professors were in a way cultural ambassadors, and the United States government’s sponsorship of these two gentlemen is a testament to the weight the U.S. government gives to cultural exchanges on campuses with new Chinese language programs.

Professor Li, knowing of my interest in China and my desire eventually to make the country and its people the focus of my career, was kind enough to submit my name to the U.S. State Department for a summer peer-to-peer exchange program.

While in China for the three weeks of the 30/30 Program and during the many months ahead that I will spend in Shanghai teaching English and world history courses designed for native and non-native speakers,  I hope I have facilitated and will continue to facilitate greater sensitivity on both sides of the Pacific.

Cultural exchanges must occur with greater frequency if the lack of knowledge of different cultures and their motivations are to be lessened.  There is much work to be done and an immersion experience abroad as an H-SC man is a step in the right direction.