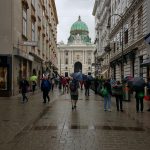 When we first arrived to Vienna, we started in a suburban town on the outskirts of the city that looked very similar to Virginia. Then, we traveled by bus to our hotel in the middle of the city and we immediately witnessed the grand architectural structures and monuments that made Vienna so beautiful. This major urban area had numerous restaurants, bars, and cafes we would later venture to after class. Budapest offered much of the same, but often times we had to take the metro as our hotel was not in the center of the city. 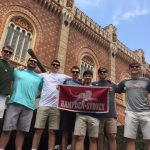 For class in Vienna, we only had to go a few floors down in the hotel where we had a conference room set up for lectures from Dr. Frusetta and Dr. Glont. Before class, we were given complimentary breakfast in the hotel with a traditional European breakfast consisting of sausages, deli meats, and many different kinds of croissants. In Budapest, we needed to take the metro one stop away to a separate building for class. 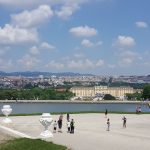 Both our hotels in Vienna and Budapest were very nice with employees who were also kind and helping. I would say that the biggest difference between living at home and abroad is the lack of air conditioning. During our may term, it was regular 90 degrees or more so we had to get used to the heat. I should have packed more shorts and sun screen.
There was excellent food in both cities. Schnitzel was easily the best meal I had in both cities, and the food stands in Vienna along the Danube river were cheap and delicious. 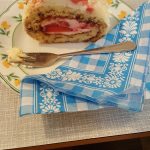 Also, during our class excursions all over the Vienna, we would often stop to get a quick snack at the many tasty pastry shops that served some of the best croissants and donuts I have ever eaten.