Money Matters and the Formal Dude

So, the topics of my first couple of blog posts came to me rather easily, I basically just took the things rattling around in my head post-arrival and sorted the major things out until they were coherent enough for anyone to read. When contemplating the topics for this post, I reached out to my mom and asked what she thought would be interesting, and she mentioned that it might be a good idea to cover some of the things that had me stressed. One thing she brought up was the foreign concept of foreign currency: what does it look like, what is the exchange rate, and, finally, where does someone go to get money exchanged? There’s a whole load of things to tackle so let’s get started.

In Costa Rica, they use a currency called colones. There are 1, 2, 5, 10, 20, and 50 thousand bills, as well as 5,10, 25, 50, 100, and 500 coins. The colon bills are incredibly beautiful, in my opinion, each denomination has a different color, and feature art of Costa Rica, from famous buildings to plants and animals like sloths and butterflies. The 50 thousand colon bill, which none of the IFSA students have actually seen in person, is a gorgeous purple color and showcases the Morpho butterfly, Bromelia flower, and parasol mushrooms; these bills highlighting the biggest industry of Costa Rica, ecotourism.

Now, how much is that pretty 50 thousand worth in USD? Currently, as type this post, 50,000 colones is about 88.30 USD. So yes, an American could walk around with an app like XE Currency, which updates constantly, but a good rule of them is ‘multiply the colones by two and then remove the last three digits, so 50,000 x 2 = 100,000, remove the last three digits and it’s about $100. The overage is rather evident, but in a pinch 100 colones is $0.20, 500 is $1, 1 thousand is $2, and so on from there. Finally, where to exchange, and I assure you, readers, this is easily the most important question to be answered; I can say that from experience. Having just arrived in Costa Rica, one of my first instincts was to exchange about sixty bucks… at the airport. This was my first mistake in the country, the airport exchange booth actually short changed me at a rate of 480 colones per 1 USD. This means that a 50,000 colon bill would actually trade for about 104.50 USD at that rate, abysmal, really, when compared to the actual exchange rate. So places that will give you a much better exchange rate: any Banco Nacional ATM, there will be a bit of a surcharge to pull out from a non-affiliated bank but it’s really not that much, a lot of hotels will exchange cash and you’ll probably be lucky enough to have a receptionist who speaks English; or in a pinch most business will accept USD as far as I’ve observed but there is always a bit of a holdup when they check to see if your money is real and everyone kind of rolls their eyes at the foreigner who couldn’t spend five minutes at the ATM to get some local money.

One more quick topic before I end this post, and this is for the Spanish learners back at Sydney and just generally out there: what is “usted”, and when/how is it used. As a basic definition, “usted” is a formal second person pronoun, it takes the place of “tú”, but it acts more like a third person noun. That being said usage of “usted” varies from country to country, how it is used and if it is used at all, someone going abroad will have the best luck with doing a quick search on Google, or even better, asking a local. In Costa Rica, “usted” is used for basically everyone, until you feel close enough and comfortable to “tutear”, or speak with “tú”. Now, I’m the type of person that uses dude as a gender-neutral form of address. Retraining my brain to use “usted” instead of “tú” has been a little bit of a trick that if you could fit “dude” into an area of a sentence in English and it makes sense, then that’s a spot where “usted” can go in a sentence, for example, “hey, dude” -> “hola usted” or “can you pass me that, dude?” -> “puede me lo regalo usted?”. It’s not a perfect rule, and I’m sure the entirety of Spain just felt the hairs on the back of its neck raise in indignation, but the “dude rule” has worked so far for me.

So, before I leave, a closing thought: when it comes to learning new things and acquiring skills like on the spot money-handling or using a language facet you hadn’t used before, everything comes down to what works best for you. When it comes to money the 2:1 ratio is good enough for me and in the case of “usted” I don’t think I could have possibly thought of a more personalized method of learning than the “dude method”.

With that, cheers to weird brain shortcuts and learning the best way we can, nos vemos. 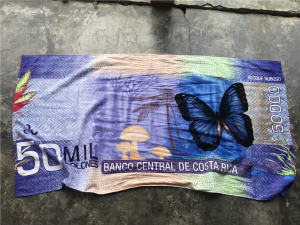 While none of us have actually seen a real life 50,000 bill, I did score this really rad towel this past weekend while in Manuel Antonio, but you’ll hear all about that in my next post about my trips to Quepos and Cerro de la Muerte.