So many of the individuals in my study abroad program have been abroad before this semester, not specifically to studying but in general they have all left the country before this year. For me, this is truly my first time out of country, and it is for a substantial amount of time and independent to a degree. That said, when you are abroad there are a lot of precautions to take while abroad that an aspiring traveler should consider. Now, I know this list is nowhere near revolutionary, but I want to discuss some of the major problems I have had to face since coming abroad.
The first thing I cannot recommend enough is proper research about your own cellular plan and available cell plans in your country of study. Personally, my plan on Verizon is incredibly expensive abroad, so my family decided to buy a local telephone in country. Now, here is the part about research, I did some digging but not nearly enough. I bought a phone at the airport, where only one of the two local companies was available. The company available only has monthly plans, instead of a pay-as-you-go, so every 17th I must return to a company store to renew; this fact is not a safety one, just a word of warning. That said, having a reliable phone is so incredibly important when you are meeting up with friends or need to work on a group project. When my friends and I go out on a weekend, we always make sure to text an “I’m home” text, so we know that we are all safe and alive.
My second word of advice is to get to know your daily area well, if someone stops you and asks how to reach a local landmark within a couple blocks of your house or school, then you should have the amount of knowledge needed to help them. This isn’t only to help you be a more helpful person, but on several occasions I have ended up close to home, but maybe 10 or so minutes away. Being able to say, “do you know X landmark?” to a local is so important in understanding how to find your house. More often than not, someone may not know the pharmacy right next to your house, but they may know the church or police station nearby. Part of this, as alluded to with my comment about “I’m home” messages, be aware of times of the day/week in which you may need to choose to uber or taxi home, instead of walking. I live fairly close to and from campus, so I can walk most days. I do usually uber home on Monday nights, because my class lets out rather late in the evening. Part of this, is a matter of time and discussion with the people who live in the same area as you, but take the time to learn about where you’re living.
This next one is easily the most pertinent to my life right now, and you will be told this by the study abroad office, by your on-site program directors, and even the STEP alerts: stay out of political action in country. Right now, there is a major national strike happening in Costa Rica; the group of strikers is composed of several major unions in protest of several problems with the government, but the unifying complaint is a current tax reform legislation. Now, whether or not I support the unions or the government is not important right now. This is an incredibly dangerous situation, which affects all points of life between transportation to academics. People have been hurt, others arrested, and school has been shut down several times. Now, the reasoning behind non-interaction is several-fold. First, and foremost, the “correct” answer is that you are abroad to study, and helping shape a political environment is not the purpose of being abroad. On a more relatable level, as a foreigner on a student visa, you can have your visa revoked for being arrested. You will have to pay for your fines, a new airplane ticket, and your experiences ends there. You will be sent home. Furthermore, a lot of study abroad programs absolve themselves of financial problems due to arrest and you will one hundred percent have to pay for that yourself. On a physical safety level, yes, as a study abroad student you have some of the best insurance you can really get for the price you pay to study abroad. That said, if you break an ankle or get physically harmed in some other way, you are possibly going to be dealing with that for the rest of your time abroad.
So once again, I’ll be ending with a quick word. From a current student abroad to someone who may go abroad someday soon: go abroad, but most importantly go safely. You don’t want to end up the person told as a precautionary tale because you got robbed four separate times in one semester (that’s a true story) or the person who didn’t finish their semester abroad because they had their visa revoked. 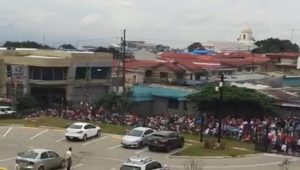 Seriously, some of these strike events are huge and make getting to classes nearly impossible.
So, in the event of something like this be prepared to take a different route altogether
and keep that local phone handy in case you receive a message that class is canceled.