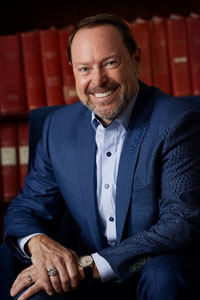 Hampden-Sydney College and the Wilson Center for Leadership in the Public Interest are thrilled to announce the Honorable Dr. John Hillen as the new James C. Wheat Chair in Leadership.

Established in 1993, the Wheat Professorship enables students to learn about both the theory and the practice of leadership under the guidance of visiting leaders from various arenas. As the Wheat Professor, Hillen will teach Leadership and Ethics—a required course for students earning a minor in Leadership in the Public Interest—and will develop a special topics class on leadership in American institutions.

“A primary goal of the Wilson Center of Leadership in the Public Interest is to connect theory and practice,” said Wilson Center Director Ryan Pemberton ’00. “Dr. Hillen’s experience in the classroom, boardroom, halls of power, and in combat will help our young men connect their time at Hampden-Sydney and in the Wilson Center to the world beyond our gates. I am confident that each of his classes will have a waiting list.”

Hillen is an award-winning CEO and leadership expert, former Assistant Secretary of State, public intellectual, decorated combat veteran, and popular business school professor. He is the author of several books, most recently What Happens Now? Reinvent Yourself as a Leader Before Your Business Outruns You, which was recognized as one of the top business books of 2018. He is currently the CEO of Everwatch Solutions.

“I’ve been teaching and writing about leadership in various settings now for 20 years,” Hillen said. “It is very exciting to bring that teaching experience and the leadership lessons I’ve learned in military, diplomatic, governmental, non-profit, and commercial roles to our students at the Wilson Center. We aim for these young men to be the CEOs, mayors, pastors, coaches, teachers, generals, and other leaders of tomorrow. To help them on that journey is a privilege.”

From 2013 to 2019, Hillen served as the Executive-in-Residence and Professor of Practice in the School of Business at George Mason University, where he taught strategy, leadership, and management courses, twice winning the outstanding professor award in the MBA program.

“The interdisciplinary approach to teaching leadership at the Wilson Center is exactly what is needed today, in my opinion,” Hillen continued. “Too many institutions suffer from overly specialized expertise in their leaders, which does not necessarily translate into the strategic sagacity, broad-minded vision, and ethical foundation that should buttress all leaders. In the finest traditions of liberal arts education, we will teach those skills to our young men to prepare them to be in the front ranks of their communities and organizations.”

“The ancient mission of Hampden-Sydney College, ‘to form good men and good citizens,’ inspired me from my first encounter with the College,” Hillen added. “We can sometimes over-inflate the challenges of our age, but it is no exaggeration to say that this mission is needed now more than ever. The decline in civic education, the overt specialization of so much curriculum, and the rancor in our politics are all connected. We need to produce well-rounded and thoughtful leaders to be the virtuous citizens that America’s founders told us would be needed to preserve a free and fair democracy. To be able to contribute to that education for young men aiming to be citizen leaders of their communities and their country is a high honor.”

Dr. Hillen will assume his new role on July 1, and a celebration in his honor will be held in Washington, DC, on Friday, October 9.

The Honorable Dr. John Hillen is an award-winning CEO and leadership expert, former Assistant Secretary of State, public intellectual, decorated combat veteran, and popular business school professor. He served for eight years as a trustee of Hampden-Sydney College, received the Algernon Sydney Sullivan Medallion from Hampden-Sydney College in 2016, and was awarded an honorary Doctor of Laws degree from the college in 2019.

Dr. Hillen has been teaching and writing on leadership issues for 20 years. He is the author of several books, most recently What Happens Now? Reinvent Yourself as a Leader Before Your Business Outruns You, which was recognized as one of the top business books of 2018 by several organizations. He also writes a column on leadership and business strategy for Forbes magazine and Washington Technology magazine and moderates leadership seminars for the Aspen Institute.

Hillen is currently the CEO of Everwatch Solutions, a mid-sized defense technology firm in northern Virginia. From 2013 to 2019, Hillen served as the Executive-in-Residence and Professor of Practice in the School of Business at George Mason University, where he taught strategy, leadership, and management courses. He twice won the outstanding professor award in the MBA program.

Prior to teaching in the School of Business at George Mason, he was the President and CEO of Sotera Defense Solutions, Inc.—a company that Hillen took public in 2009 in one of the few successful IPOs in the American economy that year. The recipient of numerous leadership awards in the military, government, academia, and business, Hillen has been named one of the 100 most influential business leaders in the DC area. He continues to serve on the boards of several companies and a number of nonprofits and charities.

Unanimously confirmed by the Senate in 2005, Hillen served as the Assistant Secretary of State for Political-Military Affairs in the second half of the Bush administration and in that capacity spent much of his time with U.S. and allied troops in war zones from Iraq to Afghanistan to the southern Philippines. He has written or edited several books on international security affairs and has published articles in dozens of journals and newspapers, including Foreign Affairs, The New York Times, The Wall Street Journal, and The Washington Post. He has appeared on every major television network and was an on-air commentator for ABC News for a number of years.

Hillen, who served for 12 years as an Army reconnaissance officer and paratrooper, was awarded the Bronze Star for his role in the Battle of the 73 Easting during Operation Desert Storm. He recently spent nine years on the Chief of Naval Operations Executive Panel, the federal advisory committee supporting the head of the U.S. Navy, and received the Navy’s Meritorious Public Service Award in 2017. He was the military advisor on the original Call of Duty video game series set in World War II.

Dr. Hillen graduated from Duke University with degrees in public policy studies and history and was awarded a Fulbright Scholarship after graduation. He holds a master’s degree in war studies from King’s College London, a doctorate in international relations from Oxford University, and an MBA from the Johnson School of Management at Cornell University.